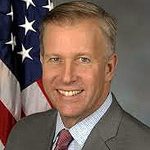 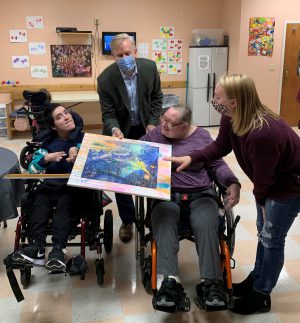 Congressman Chris Jacobs gets an up-close and personal look at the recently combined Arc GLOW, serving developmentally disabled people in a four-county area.
Jacobs toured the agency’s Day Habilitation Center in Elba yesterday. He met several individuals served by the agency and greeted several staff members.
The Arc GLOW is geographically the largest chapter in the state.
The agency sought Jacobs’ support of the “Better Care Better Jobs Act.”
Also discussed were staffing shortages and poor wages that have plagued agencies like Arc GLOW.

PHOTO: Alicia and Kathy present Jacobs with a puzzle art piece made at the Day Hab Center in Elba

Governor Hochul announced state funding for the Genesee County Airport. The airport is getting $400,000 for buying service equipment to maintain operations during bad weather. The Perry /Warsaw Airport in Wyoming County is getting $600,000 to build a new above ground spill containment fuel farm.

The four-game winning streak of the Buffalo Bills is over following a heartbreaking loss on Monday Night Football.
Quarterback Josh Allen had the ball with seconds left in the game but came up short on a fourth down attempt as the Bills lost to the Tennessee Titans 34 to 31.
With the loss, Buffalo is four and two this season but is still in first place in the AFC East.

The Buffalo Sabres are off to a two-and-oh start to their season and they’ll be looking to secure their third straight win on home ice tonight. They’re hosting the Vancouver Canucks at KeyBank Center and goalie Craig Anderson is expected to be in net for the Sabres.
Face-off for this evening’s contest is set for 7 p-m.