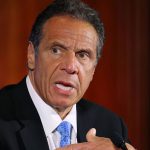 State lawmakers have reached a deal to strip Governor Cuomo of the emergency powers he was granted in the early days of the COVID-19 pandemic. Since last year, the governor has had the authority to do things like issuing a mandatory mask-wearing requirement and choosing which businesses should be opened or closed. At any time, the Legislature could have voted to override those decisions but decided not to. The Times Union in Albany reports a vote on this latest measure is expected to take place Friday.

The Governor is facing increased calls for his resignation after three women have come forward accusing him of sexual harassment. Pressure to step down has even been coming from some of his fellow Democrats and at least one member of Congress.

State Troopers file a felony charge against an Elba man.
State Police say they arrested 38-year-old Robert Douglas. He was charged with grand larceny involving property valued at more than $1,000. Police said the charge stems from a theft from a building in the Town of Batavia.

The losing streak of the Buffalo Sabres has now reached four games following a disappointing defeat on the road. The Sabres fell to the New York Rangers by a final score of three-to-two last night.
Their next game is set for tomorrow night against the New York Islanders.